Salma Hayek was filmed breastfeeding a hungry baby in Sierra Leonne by ABC news to help lift the stigmatism of breastfeeding in this local culture and crappy stories crop up about breastfeeding (like this one). Referring to mothering.com as "crunchy" and stating ew.com's reaction as "squeamish" when in reality the authors praise salma's breasty move.

On a related note, Facebook is following the "all-but-nips" policy for their pictures, after removing harmless pics of women nursing their babies. BOO, facebook!
Posted by LissyJo at 8:57 AM No comments:

What are you, prisoners?

The arguments i find myself getting into with my 4 yr old are trying and exhausting. No longer does distraction or redirection work for her. She demands explanation. She negotiates. She comes up with compelling arguments. And, for some reason, i find myself falling hook, line and sinker for it almost every time. And i get the fact this is the reason her arguments seem to get stronger and stronger on a daily basis. My husband shakes his head at me when he walks in on a complicated discussion about how wearing 5 pairs of underware is not the green thing to do because it wastes water (yes, i know water just comes when we turn on the faucet, but....on and on and on).

I draw the line at hitting. It's always been something that i have emphasized we do not do. In any circumstance. It lead to a deep discussion about how sometimes you feel like hitting when you're frustrated or angry and how can we express these feelings without hurting anyone. So the other day amelie was angry with me for some reason or other and she reared her fist back to hit and stopped Then she said, "I'm SO angry i want to bonk you in the head, but i won't!"

I guess we'd call this progress?

Yesterday, when i dropped amelie off at school, we made a deal she could show her pony to her teacher, but then she'd have to give it to me. When it was time to hand the pony off, she held on to it as tightly as she could and curled her body into a ball around the pony. I said, "Give me the pony." Some other kids were watching and one girl said, "Don't do it, amelie! Don't give it to her." I ignored her and said, "I'm going to count to 5, then it's time to give it to me." The girl went on, "Hold on tight, amelie! DOn't give up!" Me: "1, 2.." The little blonde devil-child: "HOLD on tight!" Me: "3, 4, 5. Give it to me." Some other kids joined in, "If you hold on tight, she'll give up, amelie! Use your muscles!!" I had to tackle amelie to the ground in the middle of a circle of chanting 4 yr olds. As i swipped the pony, i hissed at amelie through gritted teeth, "We do NOT act that way."

So, i blame day care for at least some of her poor behavior.

It's not all that bad. She's totally obsessed with andrea boccelli and sarah brightman. Here's a clip: 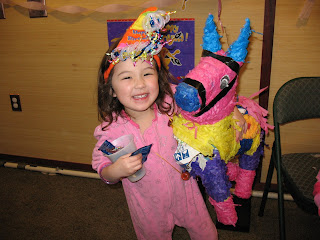 I'm on a blogging blah and don't have a whole lot of profound things to complain about. This doesn't mean i haven't been busy with life.
Amelie turned the big 4 a few weeks ago. We left most of the planning to the bday girl, and she decided on a pajama princess party. She gave us a guest list that included about a dozen friends, most from her school. We also decided to let parents do the ole drop-n-run. All in all, it was a success. The only tears were fleeting when it was realized by few that there were not enough prizes for everyone (Welcome to life, it isn't fair). The kids were well behaved and had a great time. There was only one "You can't tell me what to do, you're not my mom!" moment (which is funny coming from the girl with two dads).
Amelie got a grandmother-made princess dress that was definately the highlight. The picture below is taken from the back, because my mother unknowingly sewed it with a plunging neckline, that exposes her nipples. My mother, who doesn't get bothered by much, called me on two separate occasions to ensure amelie did not leave the house with her nipples showing and made me promise i would put a shirt undernieth until it was fixed. 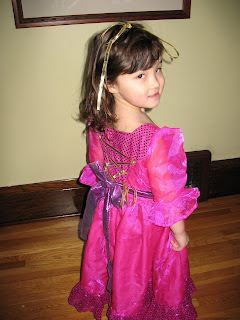