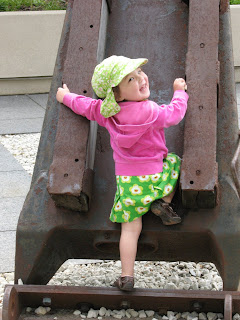 For the second year in a row, we went to chicago for the memorial day w/e. Above is last year and below is just a few days ago. 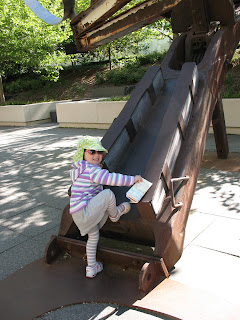 The hit of chicago, by far, was the millennium fountain. It was the cause of much joy and many tears. I'm still wondering if the 3 yr old tantrums were worth it... 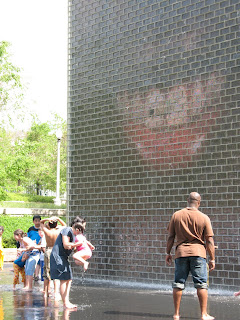 Yes, the baby was with us--proof is below. As we crossed this river, the 3 yr old amused the locals by yelling, "LOOK, mom! The river is green?!" 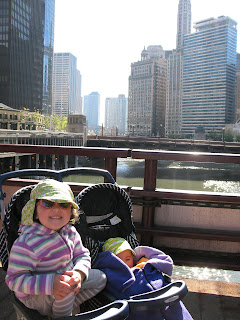 Overall a successful trip. The 3 yr old was a roller coaster of emotion--quickly oscillating between laughing maniacally or crying in a whiny fit. The 3 yr old amused fellow bus riders on our way back to the heart of the city from lincoln park by looking out the window and yelling, "It's Lake Michigan, mom!!" I agreed with her observation proudly, thinking everyone loves an inquisitive and excited child. Then my inquisitive daughter started laughing and pointing at a gentleman with cornrows, saying, "His hair is SILLY, mom!" At this point, i tried to hush her natural curiosity.

The field museum was excellent. The exhibit about egyptian pyramids and mummies lead to difficult questions from the 3 yr old. "Why are they mummies? What does 'buried' mean? Why are they dead? How can i be buried?" We went to another exhibit that chronicals the evolution of the world including mass extinctions, which lead to questions like, "Where are the dinosaurs? Why are they gone? What happened? Why did the dinosaurs' teeth fall out?" The last question stems from my daughter's trauma from watching us play the wii at my brother's house--a game where you pick worms out of the teeth. Watching this, along with hearing about her cousin's teeth falling out lead to a fear of tooth-related trauma.

When i grow up?

My 3 yr old daughter is currently obsessed about princesses. The kid doesn't watch tv, has never been exposed to disney princesses, but she picked it up. From daycare. Like a virus. If you can't tell, i'm not exactly enthused. Looking at the disney princesses with their unattainable body shape and ridiculous clothing and with only one minority represented i wonder what sorts of messages my 3 yr old gets from idolizing them. I decided i would not buy princess-themed crap (did you notice those sluts will put their image on anything? Band-aides, crayons, food, socks). But the 3 yr old and her parents are celebrating being diaper-free at night, so we celebrated by buying her some underwear--whatever type she wants. You can guess what she chose. I tried to convince her to get stars or dora or hello kitty. No. *sigh*

Yesterday she asked me, "Mom? Know what i want to be when i grow up?" She used to want to be a nurse practitioner like her mother and her grandmother, so i was prepared for her to tell me this again. Instead, she horrified me by telling me, "I want to be a princess when i grow up!" It was like she told me she wanted to join the army. I tried not to react too much and told her, "If you want to be a princess when you grow up, you have to go to university and get a masters degree and learn french." I continued to inform her that the princesses she so much loves all have doctorates in science and they all are fluent in a 2nd language.
Posted by LissyJo at 1:09 PM 5 comments:

Something To Blog About

With the recent tragedies in myanmar and china, who knew there was an opportunity to give a shoutout to breastfeeding. Two days ago, a Save The Children representative was speaking of how the children of myanmar are surviving (or not) in the aftermath of the cyclone. He mentions the orphaned infants are surviving with the help of "milk maid prostitutes." Uh-huh. That's the term. "Milk maid prostitutes." With the contaminated water, apparently powder formula that has been donated is of no use.

And yesterday, my husband heard a clip about a chinese policewoman who is breastfeeding 8 orphaned infants.

Speaking of orphans, I have been playing songs from the movie Annie (1982) on youtube to play for my 3 yr old. As a kid, it was my favorite movie. We had the movie, the soundtrack, the piano music, etc, etc. As i listened to the lyrics of the song Maybe 20 years later, i couldn't help but cringe. She speaks of how her parents are going on with life and "...their one mistake was giving up me." I'm not exactly sure how to explain what the song is about to my 3 yr old; I can't imagine the explanation that came from my parents. I think about the songs from this movie fondly, but as an adult as i'm hearing them again, i can't help but be a little sad about it. It might be obvious as to why i attached myself to the movie as a child, but now that i am a mother, i can't help but think it must have been sad for my own parents. I'm not sure what they said, but obviously it didn't damage me because i still think fondly of the songs and the movie.

Speaking of movies, we signed up for netflix and have been catching up on movies we haven't seen in the past 3 years. We watched the documentary End of Suburbia, which was depressing. Mostly, the movie speaks of how we have reached the peak of all available oil in our earth and we have to think of alternative energy now. Or yesterday. It makes me think about how i will shock and disgust my future grandchildren with stories of how i drive 20 miles to work and how i used to drive a gas-guzzling truck to school (even though there was mass transit available) and how i used to buy groceries that contained mostly food products grown miles and miles away from where i live. My grandchildren will tell me, "Wow, grannie! You used to be so wasteful, it's tragic." 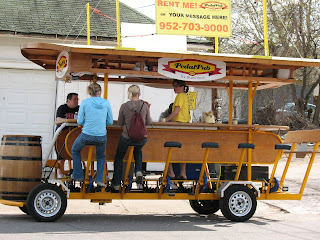 We could rent this sucker to do ragbrai...wadda ya say?
Posted by LissyJo at 5:00 PM 3 comments: