So, we found out our team (named by my brother, something like Token Asian) has been accepted for RAGBRAI. I had started training months ago, but now it's on like donkey kong, i have refreshed motivation. I've been riding a lot recently and enjoying all the trails in the twin cities. I feel like i'm a respectful rider; I don't run over the runners, i respect traffic laws and i always say "On your left" when i'm about to pass. I also like to think i'm a smart strong woman when i ride in out-of-the way trails or in the city. I did bike-commute to an inner-city hospital, often times at midnight without a blink of fear. But i'm proactive. I took tae kwan do as a child. I may be small, but i'm strong. And i ride fast. I have an attitude of Don't F With Me when riding at midnight or in out of the way trails.

Recently, i was riding around the crosby lake trails, which are near the river, and sort of hidden. I was on high alert, scanning the brush for rapists, riding at a quick clip, and thinking about how to pimp out my bike with pepper spray. I started coming across walkers, riders, fishermen. Every single one of them would make eye contact with me and either nod their head, smile or say 'hi.' As if to say, "It's perfectly safe to walk these trails. We are minnesotan and we use our trails with confidence and pride."

It made me proud. I'm glad i live in a city that plows their bike trails in winter, supports their trails, and has the most walking/biking trails in the city than any other.
Posted by LissyJo at 12:44 PM No comments: 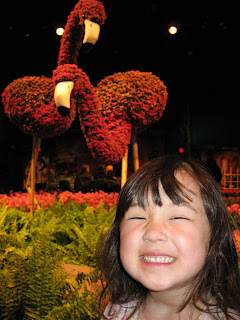 I can't complain too much--She's smart, outgoing, curious and expressive. But recently, we have been butting heads. I have read plenty of parenting books who tell me it is the job of a 4 yr old to test her boundaries, but i guess i expected a break here and there. As soon as she sees me, she pushes and pushes and pushes. Just doing her job.
I had a 'parenting moment' (as the ecfe mom's group calls it), last week. It started with amelie telling me her hair wasn't pretty. I'm not sure what happened next, but amelie melted into a puddle of tears and frustration. She wouldn't eat. She wouldn't put her shoes on. She wouldn't do a thing. After a series of trying the parenting books' recommendations (I can tell you're frustrated by the way you're smacking my leg. It sounds like you're angry. I cry sometimes too when i don't get my way), i tried a new way including yelling (and swearing!) at her at the top of my lungs. After i yelled, i walked upstairs into my bedroom and closed and locked the door behind me and told amelie, "Mommy needs a time out." All the while, she is following me howling about how her feelings and ears are hurting.
It wasn't pretty.
Since then, i have read a few more parenting books looking for answers. Unfortunately, the majority of parenting books are aimed at people who beat their children and have no clue (Children seek attention from their caregivers--good or bad. Children respond to positive reinforcement better than negative reinforcement. A child may act out if they are hungry). The funny thing is, since then, she has turned a corner and is a complete angel. She keeps reassuring me, "I have good listening ears today, mommy," and "Aren't i doing good with using my words today?"
Steady she goes for now.
Posted by LissyJo at 12:25 PM 1 comment:

I don't blame you. A few headlines if i may: Hundreds may die from swine flu. Swine flu takes health community by surprise. Swine flu pandemic imminent. One step from pandemic. I wonder how these headlines help us as a community. Very little has been mentioned regarding how to prevent infection. Wash your hands. Cover your cough. Eat healthy foods and drink water to keep your immune system functioning and stay home when you're sick.

Which leads me to another point. There has been a hindsight shout out in articles about staying home when you're sick. But this isn't the mindset in our culture. It is frowned upon to call in sick to work. This is evidenced by limited sick time, combining sick and vacation time and needing a note from your health care provider if you're "sick" longer than 4 days. This note requires a visit to the clinic and most of the time, people don't need medication. They need to stay home, feed their immune system and stop giving it to all the well child visits in the waiting room. Talk about wasteful healthcare spending.

Famous last words, or wise beyond my years? Time will tell...

BTW: As if we needed another reason to scare the white people about the brown people.
BTW: Michelle Bachmann: You're an F-ing idiot.
Posted by LissyJo at 10:55 AM 1 comment:

Staple of the Neighborhood

Yesterday, our family attended a very casual memorial to an old neighbor who lost his 12 yr battle with cancer recently. Although he had cancer for so long, he was quite healthy, and his deterioration was quick in the end.

Henry wasn't only a wonderful neighbor who would dog and cat sit when we'd go to australia, praise any food i'd cook him and snow blow the whole block, he had wonderful stories of the neighborhood. His house was built by his grandfather and was one of the first in the area. He'd tell us stories of how our neighborhood was formed. He remembers going cow-tipping in the nearby farm, which is now bracket park. He was also a bit of a car junkie and had 2 corvettes he'd tinker with. The very same corvette was used to race down lake street when he was an adolescent. He had a great story of getting chased by the police down an alley. He took a quick turn into a stranger's garage and closed the door just in time for the police man to rumble by. Afraid of starting his loud engine, he sat in his corvette at 3am waiting. Two hours later, he walked his car back home.

He knew our house throughout the years. He was able to explain why some floor boards were put together strangely when we did some remodeling. As a child, he'd come over to our house and lie over a large grate over the furnace. Since that time, someone had repaired the hardwoods (poorly). As a teenager, he also remembered watching young college women who were renting our house at the time, playing topless fooseball in the dining room; His house's kitchen window had a straight shot view.

When i became a nurse at the hospital he was born in, he became my biggest fan. When he'd go to the hospital to get chemo, he'd ask all the nurses if they knew me. Some of them did, and would later tell me that Henry assured them i was keeping a close eye on him. When i learned of this, with much insistance, he did let me change his dressings here and there, but moreover, he let me convince him to get a home health nurse. In the end, he could no longer tolerate the food i'd bring him (and wouldn't admit it could possibly be my cooking!).

Last night, the hubs and i went to The Muddy Pig. LOVE this pub. It's got a quatrillion local and oversease brews on tap and moderately tasty pub grub. My husband and i used to think we were beer snobs enjoying the beers of australia and england, but the US is creating some fine beers in a grassroots fashion and providing great pubs to serve them. Unlike in britain or australia, where the pubs are owned by one brewer and only serve their 4 brews (true, no?).
Posted by LissyJo at 11:01 AM No comments: 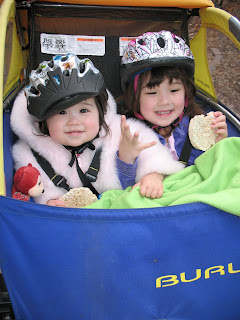 I am currently training to ride my bike across IA with my husband, brother and father in july. I'm finally in a training groove--enjoying finding different circuits, thinking of milage and heart rates, and really enjoying it. I remember this groove when i trained for a marathon (did not complete, btw). I call it my church (see previous post)--it calms me, gives me time to think of stuff, and i'm a better [NP, mother, wife, person] afterwards.
Posted by LissyJo at 12:17 PM No comments:

I almost forgot i had a blog until 'anonymous' commented on an old post about Adoption Stories. She called me a jaded, shallow adoptee. I almost cried.

But it brings me to all the religion-related media i've consumed recently. I finished A Year of Living Bibically, by A.J. Jacobs. It was the funniest thing i've read since Sedaris. This agnostic manhatten journalist decides to read The Good Book and follow the rules for 1 yr. From the ridiculous (don't wear mixed fibers) to the admirable (don't lie). An interesting observation he makes is religion is based on faith. And sometimes you have to have a leap of faith even when you don't understand what the rituals (or bible rules) mean.

Last night, we watched Religulous. It was almost the unrelated book in movie style, except Maher is no doubt much more cynical and downright doubtful. His conclusion is the bible is a book written by men and edited poorly. Religion has been used to gain power, money, control and the original message (be good) is lost in the details.