My father-in-law and partner arrived from australia to mpls a full 24 hours late after a layover in hawaii due to mechanical problems. We picked them up from the airport at 7am and took them to the state fair. I manage to go to the fair every year, and my fair-going experience has changed through the years. When i was a kid, i went to the fair several days in a row with my mother who was "man-ning" the 3rd District Nurses Association booth (which was always fun because it was right next to the MN AIDS project booth where they gave out free condoms!). As a childless adult, going to the fair meant going through several buildings, eating lots and seeing all the animals. With child, we are lucky if we find Martha's Cookies. I realize now that everything at the fair is aimed at children. Even the roofing and siding booth has a spinning wheel with prizes for children (DAMN you whistle prize!!).
Here is the aforementioned child working on a lowe's toolbox. 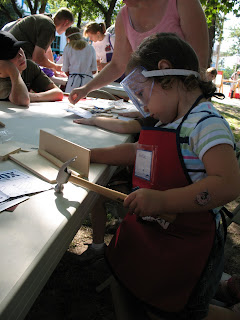 Here's mommy finishing the lowe's toolbox while the toddler looks longingly at the birdfeeder next seat over. 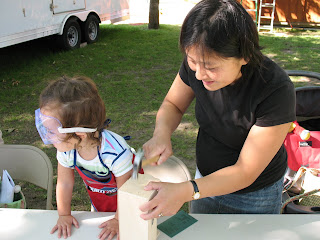 Ah, but she found her love again for the toolbox...Here is several hours after the fair with beloved toolbox and gear. 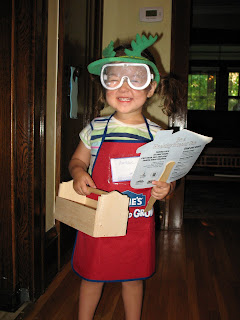 Other highlights of the fair included the carosel, the kids farming exhibit and the SCSU 'tattoo' (My husband: "Like hell she's going to scsu...").
The australian visitors managed to muster up some excitement for the fair through a jet-lagged haze. They also managed to avoid anything on a stick (despite your video, scooter), and actually found real, frozen, fresh grapes. Not fried. Or stick-ed. Or fried. At the fair.
Posted by LissyJo at 6:34 PM

Did you go through the H House? Why not poor deprived grand daughter.

Oh man, we didn't find the Lowe's booth, we only went to Home Depot (and made a very similar looking "art caddy") where I got totally stressed out because I am not a very good carpenter ;-)

Next year, we are definitely getting a babysitter for the kids and going back later in the evening ALONE!