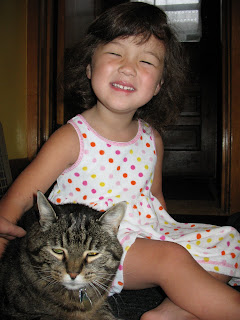 I woke up this morning to the news that our cat, Gato, died in her sleep last night. Although she was 15 years old, her death was rather unexpected. After i got over my own sadness, i quickly shifted to how the hell i'm going to tell my almost 4 yr old. I seriously considered getting a similar looking cat to replace her (c'mon...She's 4. Would she really notice?), or coming home with a kitten; Sort of a good news-bad news situation. But i was assured at work this would lead to life-long therapy for our daughter.
Gato lead an interesting life--i got her from a friend in high school as a kitten and because we lived in the country, she quickly became an outdoor cat and my father insisted i teach her how to 'hunt,' by giving me a coffee can full of rat babies and telling me, "You're her mother, teach her how to hunt." At age 16, i was pretty mortified, but managed to give her a lesson that stuck. She endured a few years in arizona with my parents when i went to college and i took her back after they called her 'coyote bait' one too many times. She would bring me dead rats and birds to the doorstep often. In her later years, she served as a great cuddler, and the girls really loved to crawl and tug and pull at her.
She will be missed.
Posted by LissyJo at 5:37 PM

Awww, sad. How did Amelie take the news? I'm often surprised at the things that Katherine can understand and the responses I get from her sometimes seem like they should be coming from someone a lot older than she is.

So sorry that gato went to the great mouse-hunt in the sky. Very sad. :(

I remember when our first pet died. I was probably 6 or so, and my mom gave us the big talk. I'm sure Amelie will understand at a basic level...

And now you can get them a kitten for Christmas.