After 2 days in london, we drove up to Eyam, which is in "The Midlands," to see ceri's ex-uncle and step-aunt. I did find the relation strange, but considering ceri has known them growing up, and hadn't seen them in years, it wasn't such a strange connection. They had their grandchildren staying with them for school holidays (george and emily), and we figured out they are 2nd cousins of our girls.

The drive to Eyam was my favorite. They call it the Peak District, and it was lovely. We drove by lush green farmland separated by 100 yr old dry stone walls. The sheep had just popped out their babies, and they were so cute. Eyam is an old village that is known for shutting itself off in the 1600s when the plague came through. It has some very interesting history. Below is 'main street' of Eyam. 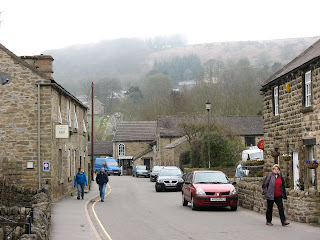 Below is the main church in Eyam. It's a beautiful old chuch with only one person buried from the plague. Interestingly, because the town was shut out to the outside, most people had to either bury their own loved ones in their back yard or card them to the local plague pit. 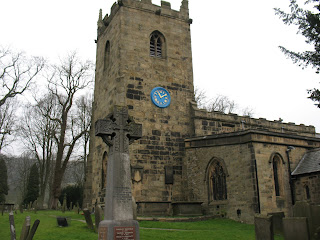 Aunt Lynn brought us to Chatsworth Palace that was nearby. They converted the connected farmyards to a kids play area that was perfect for the kids. Below is the actual palace. 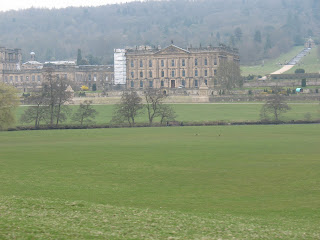 Peter and lynn are also very interesting people. Their house is the Doctor's House for Eyam, and he's lived there for 30-so years, when he first moved to the village. It has been a doctor's house since it was built in the 1600s. Peter is retired now, and spends his time training for long distance walking. He had just returned from a week long walk, and was preparing for a walk across ireland. Three yrs prior, he and a friend walked the longest stretch of the Great Wall of China any person has walked. He is also a runner, and was preparing for the London Marathon, which was 2 wks after our stay. He forced me to run with him in the country side, and we ran by the Boundry Stone on the outskirts of Eyam. This stone is the village boarder, where people would leave the supplies for Eyam during the plague and the villagers would leave their coins soaking in vinegar to disinfect it.
Posted by LissyJo at 12:41 PM

I love the Peak District! We stayed for a few days with some of Gary's university friends in a renovated church when we were there and it was such a neat experience. That's one place in England that I don't mind visiting.