Guess How Much I'm Better Than You 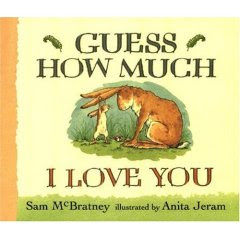 The toddler has found interest in a book she has hidden in her book box: Guess How Much I Love You. She got it as a gift from a relative but we never really read it much to her because it bugs me. Now my daughter has decided she loves the book a lot. And i'm forced to read it. A lot. Does this "classic" book bug anyone else? It reminds me of certain people i know who always tries to out-do you whatever you say. You tell them you had a bad day. They tell you they had the worst day. You tell them how cool it was. They tell you they experienced way cooler. The same thing happens in this book. Instead of embracing the poor little bunny's love, he has to out-do every single thing he says. IT'S ANNOYING! Even when the poor kid falls asleep, probably thinking they can do nothing to love the big hare enough, the big hare is out-doing his last sleepy statement. What a jerk. If i were little nutbrown hare, i'd scram. Nothing says big nutbrown hare is his primary caregiver.
Posted by LissyJo at 2:05 PM

mixed feeling about the book... but a certain someone loves that book... I thought I loved it so I bought it for LN before she was born, then as I read it to her, I felt a bit conflicted for the same reason... it seems to be more for boosting the parent's emotions, doesn't it?