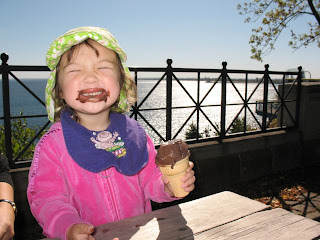 I have managed to keep busy and not had much time to blog lately. I'm still "enjoying" work at the new job (challenging and mind-bending), mothering a toddler, angry and raging over current events (as always) and the last week, hosting my FIL and his sig other after their backpacking trip through italy.

Last night, we took them to the guthrie to see Pillowman. I have linked a review of the play rather than the official site because it is a review i very much agree with. At first glance Pillowman is supposed to be a "dark comedy/thriller." Unfortunately, it was a depressing, causterphobic tale of child torcher, murder and unfair interrogation. The artistic director states in the director's notes that "I hope it raises questions for you about censorship, freedom of expression and artistic responsibility," and we are invited to come back on sunday for a discussion group after the matinee show. Perhaps the artists are asking us to compare these interrogation techniques to what's happening in guantanamo bay. Or maybe they would like to compare the US's own unfair and bias police tactics nationally with that of the investegators portrayed in they play. Or perhaps question our own freedom of expression and how that is being challenged today. I had the feeling i was supposed to leave this play angry and frustrated about these things and talk about these current events. Unfortunately, the peculiar backstories of each of the characters and the writer's stories themselves were too distracting.

After a night of strange dreams and nightmares, this morning, we had an artistic cleansing of the palate by attending the Heart of the Beast for the children's puppet show. What a great show! My toddler was a little hessitant of the puppets at first, but quickly warmed up to the loveable characters and the occasional song. We will definately be doing more of this on saturday mornings and highly recommend it.
We took the visitors to the cabin for a night and duluth for a night. Above is a pic of my daughter enjoying a chocolate ice cream on the shores of lake superior. We caught the height of fall colors and had surprisingly warm temperatures. One of the highlights of this little trip was Hells Kitchen just opened their 2nd restaurant right across the street from our hotel in canal park! Gawd..i'm not a big breakfast person, but OMG: They make it a damn good meal.
Finally, my toddler had her very first art show. I don't think she made any money, but you know what they say about your first art show....It's all about getting the word out about her art, not making money.