To my shock and surprise, xmas is still coming--even though we had a baby. We did the yearly LissyJo family visit to Jackson Street Roundhouse to see santa last weekend. The toddler got hopped up on popcorn and candy canes and had a great time. Here we are waiting to get on the train. The train pulled up with santa and mrs. clause on it--they have just walked by and the toddler is adjusting to the idea that santa is not scary. You can't really see in this picture, but she has strapped around her neck my old cabbage patch purse that she has claimed as her own. Inside it has a too-small bathing suit that she insisted she wanted to show santa. 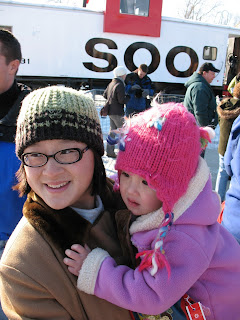 After the train ride, we got to have a visit with santa and mrs. clause. The toddler asked him what he wanted for snack and decided against showing him her bathing suit. After the picture was taken, i was taking the baby back and mrs. claus asked me how old the baby was. I told her six days. She said, "OOoooohh, Santa! The baby is 6 days old! Be careful, give her back!" 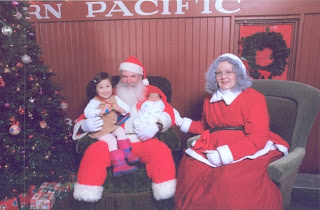 AW... I actually love the picture of you and toddler more than the picture with Santa... I'll have to remember this for next year - we didn't do the Santa thing this year.

We kind of went overboard with the santa thing. I'm a sucker for xmas traditions and and glad to play up the santa thing...I'm not sure how i'll handle the baby jesus thing when she gets older!

I didn't grow up with the concept of Santa and didn't think that A-chan and B-chan necessarily need to do so. However, the Mister did grow up believing in Santa for a time. He said his mom went to great lengths to make them believe. So he wants A-chan and B-chan to grow up the same. I guess I have no valid reason to object, so A-chan believes Santa is coming to her house this year and that she has to be good or he won't. I have taken her to get her picture taken with Santa every year since she was born, so I don't know why I would be against her believing in the dude.