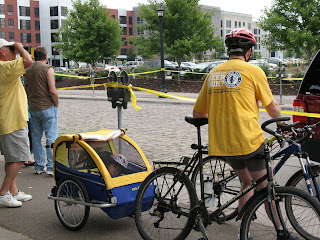 Yesterday, the LissyJo household decided to get on the bikes and have a ride. We went up by downtown near the river to get a gawk at what is left of the bridge. I definately have pregnancy hormones on board...I started to cry when we passed over 35W via 4th street (right before it goes over the river); You could see it end at a very awkward angle. I didn't get a pic of that because we were among tons of traffic. Also noted is the road just up from my brother's old apartment is jam-packed with national media trailors. The following is the view from the st. anthony main side of stone arch. Stone arch was still closed when we were there, but we heard on MPR that is is going to be open today. 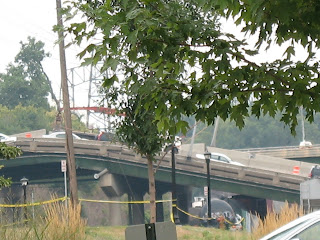 Here is a picture of some of the network news media whores near stone arch. The park was pretty full of them. I have been fairly successful at not listening to or watching the news about this story (difficult to do in my neighborhood; Easier to do with tivo, baby). The little bit of news that i did see had a fox (of course) news whore interviewing a woman whose car was on a faulty part of bridge, but escaped. She asked, "And you have a little three month old baby at home...What do you think would've happened if you would've been a little further out on the bridge?" You whore with no soul. 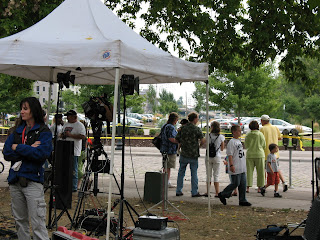 And here is a pic of the view of the bridge from the other side of the river...along with a view of the back of my pregnant head. You probably can't see much in this picture unless you're familiar with this area. You can see green "support" metal sticking up at an angle if you squint. 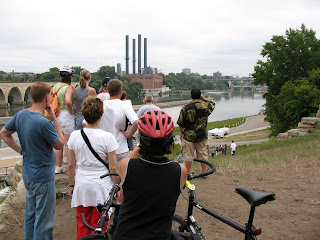 I drove on University to work on Thursday. As I got close to 35W, I started to get a very uneasy feeling in my stomach and got a little teary. We tried to get a peek when we were on Washington after the Twins game on Saturday, but there wasn't much to see.

I would be teary eyed pregnant or not. What a terrible and sad thing to have occurred, I'd be a bit scared to go across any bridge in that area until it was all cleared as safe.

So were we wandering around near the bridge at about the same time yesterday? That would be strange. I didn't see you from the top off the parking lot.